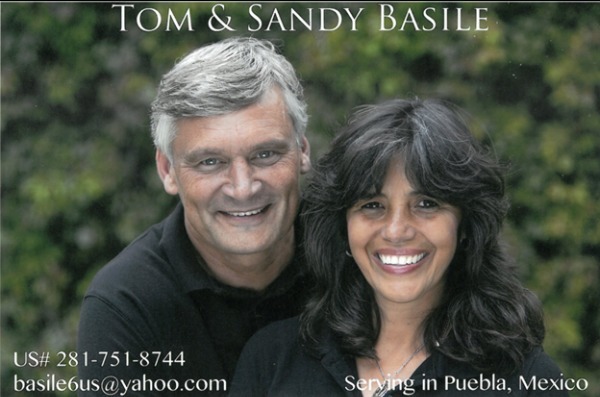 Coming soon: Tom and Sandy Basile, DCC missionaries in Mexico, will be at DCC/DCS the middle of May!  Tom will be preaching May 15th. Here is a bit about them:

At age 19, in September of 1981, while in Upstate New York, Tom trusted Christ as his Savior and experienced a miraculous change in his life.  Two years earlier Sandy Ramirez at age 16, trusted the Lord in South Texas. The following year they went to Florida Bible College.  They both immersed themselves in God’s Word.  During their first missions conference Tom dedicated his life to missions in January of 1983.  He met his wife to be, Sandy, shortly after this decision and the two were set on a course of missions from that point forward.  They were married in June of ‘85, graduated in ’86 and moved to Downingtown, PA to do a pastoral internship for two years.  After their fruitful time at Calvary Fellowship, Tom felt the need for more preparation.

The Basile’s decided on Western Seminary where Tom received two master degrees (M.Div in Missiology; Th.M. in Systematic Theology).  Their first son Matthew was born in Oregon and soon they were off to Costa Rica to spend one year learning Spanish.  After Costa Rica they moved to Puebla, Mexico where Tom taught at Puebla Bible Seminary for 10 years, started El Camino Bible Church, served as Circuit Director, and served on the Seminary’s board for three years.  In December of 2010 Tom finished his doctorate from Phoenix Seminary in Business As Mission (BAM).  Presently he is the Director for New Church Initiatives for Mexico and is about to start a seminary/camp in the State of Veracruz to reach indigenous groups living in that region.  Tom and Sandy have four boys (Matthew 30, Caleb 28, Stephen 25 and Zachary 20) and have lived in Puebla for the last 30 years.  They have been blessed with five grandchildren and enjoy reading books with them via video and of course the visits are precious.